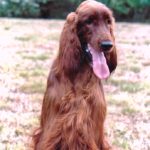 Erin is from a breeding by Mary E. Klinck and Debra Davis, she was whelped at the Orchard Farm Kennel, in June 2007.  Her sire is an American male, and comes from Tealwood Kennels. She was our foundation bitch to start Erinshire Irish Setters and breed our first litter.  She was not a show dog, even though she has lovely confirmation, she just did not have a “show attitude” and was not happy even when she was shown as a puppy.  Erin preferred to be a field dog, so that’s what she did.  I purchased her for her pedigree, and bloodlines to combine with Reagan to produce a litter, and that she did very well, 6 males and 6 females were born on April 04, 2010. The puppies we kept, Scarlett finished her Am. championship and Canadian pointed.  Also from this first litter…… Eliott is our first BEST IN SHOW dog…American Champion as well as a Canadian Champion.  In 2015 at the National in Canada he went Select dog, the same weekend twice more Select Dog, at a Specialy and an all Breed show….(owner handler). IWe did not expect to have a “dream come true”, with this our first litter…….a dream for every breeder is to have bred a BEST IN SHOW dog…. All the other puppies are in pet homes and are equally beautiful.

When this litter arrived we decided it was going to be called the “Forever Litter”.  because it 3 years and more, to research, purchase, and wait till she was ready to breed to Reagan. Her health clearance from OFA were “excellent” and her CERF was clear.  All thyroid testing was neg., and she was a wonderful brood bitch with her puppies.  She had an attitude that she was going to be in charge, keeping her puppies in line, at the same time she was frantic if one was missing.  To describe her as very protective, loyal and loving, is just the beginning.  We decided to only breed her the one time so we could focus on the Erinshire puppies we kept. Now with 5 dogs in the house and 3 of them under 18 months, it was very busy and Erin needed her own family.  We found a home for Erin where she would be the only dog, to an retired couple, who were looking for an older Irish Setter, that was house trained and could be a companion for them. So we felt it was time to retire Erin and she went to the Bakers in sunny Florida. It was a year later, that I was in Florida for a dog show, and made a visit to Erin.  When I was leaving the Bakers home, they walked me to my rental car, Erin followed, I gave her a kiss, as I was saying thank you to them, Erin walked back to the front porch layed down and waited for her “family”.  This was the best thing to do for Erin and she is very happy, as are the Bakers.

There is only so much time when there are puppies to raise and train, and every dog needs time and attention, placing Erin was not an easy decision, but the right one for her to enjoy her life with her next family, and the joy I know she brings them.

Achievements:  Foundation Bitch for Erinshire Irish Setters, the Forever Litter, wonderful puppy and companion to us, a true hunting dog, now a companion to the Bakers in Florida.